What Are Decentralized Applications (DApps)? 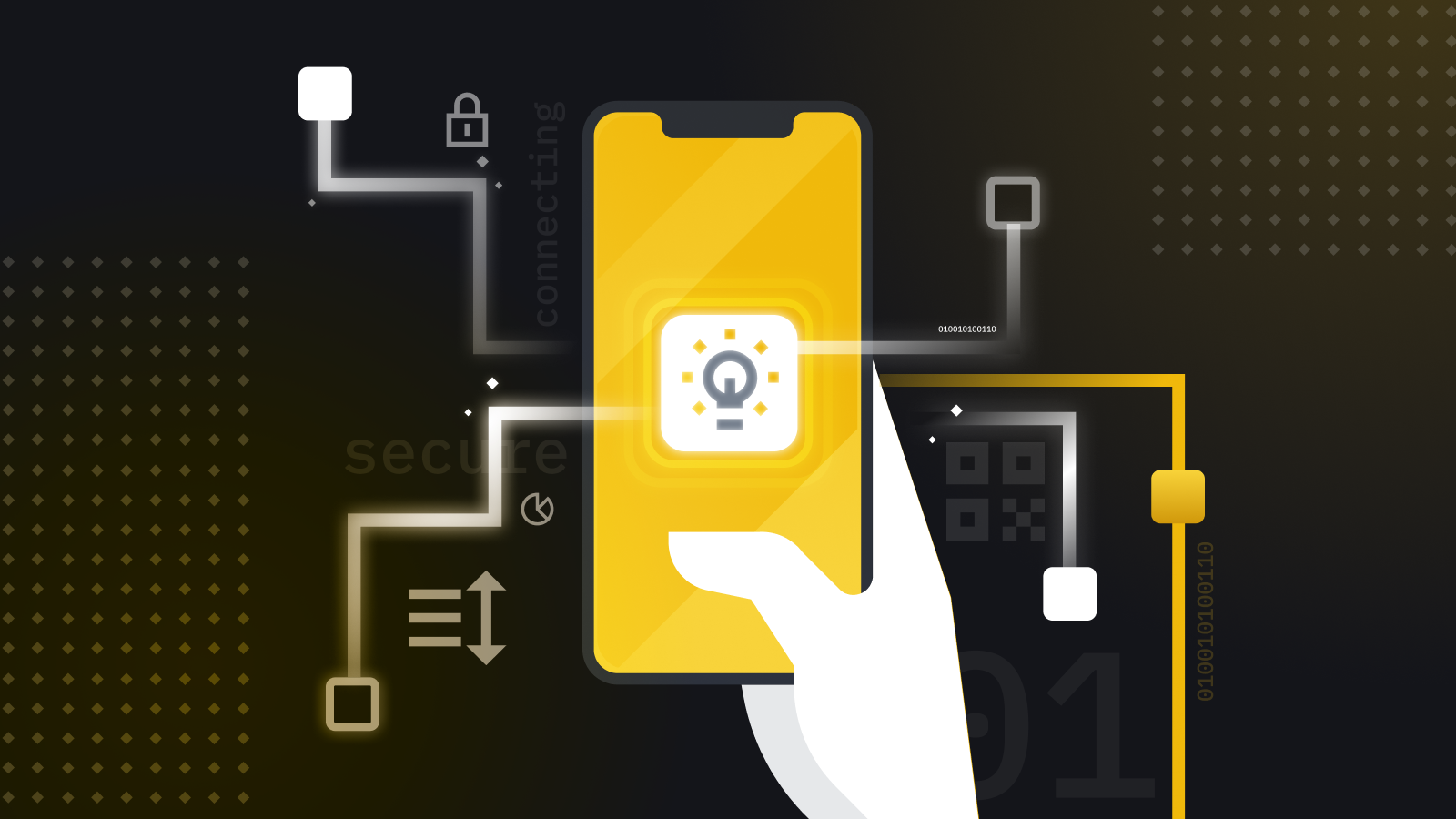 Tags :
Decentralized applications (DApps) are smart contract-powered digital applications or programs that run on blockchains rather than centralized servers. They look and feel similar to regular mobile apps on your smartphone and offer a wide variety of services and functions from gaming to finance, social media, and much more.
As the name suggests, DApps run on decentralized peer-to-peer networks. One early report suggested that DApps have the following features:

Under this broad definition, the Bitcoin blockchain can be defined as a DApp — and arguably the first DApp ever. It’s open-source, with all data live on its decentralized blockchain, relies on a crypto token, and uses the PoW consensus algorithm. The same applies to other blockchains that have the above features.

However, today the term “DApps” generally refers to all applications that have smart contract functionalities and run on blockchain networks. The Bitcoin blockchain does not support smart contracts, so most people wouldn’t consider it a DApp.

As of June 2022, most DApps exist on the Ethereum network. It offers a robust infrastructure for DApp developers to expand the existing use cases. But as DApps mature, developers have started building them on other blockchains, including BNB Smart Chain (BSC), Solana (SOL), Polygon (MATIC), Avalanche (AVAX), EOS, etc.

How do DApps work?

DApps are applications powered by smart contracts. Their backend code runs on distributed peer-to-peer networks. A smart contract works as a set of predefined rules enforced by computer code. When and if certain conditions are met, all network nodes will execute the tasks that the contract specifies.

Once a smart contract is deployed on the blockchain, it is hard to change the code or destroy it. Therefore, even if the team behind the DApp has disbanded, users can still access the DApp.

While the interfaces of DApps and traditional applications can look similar, DApps offer multiple benefits compared to their centralized counterparts. Web apps store data on centralized servers. A single compromised server may take down the entire network of the app, making it temporarily or permanently unusable. Centralized systems may also suffer from data leakages or theft, putting the companies and individual users at risk.

DApps, in contrast, are built on distributed networks with no central authority. With no single point of failure, DApps are less vulnerable to attacks, making it very difficult for malicious actors to hijack the network. The P2P network can also ensure the DApp continues to work with minimal downtime, even if individual computers or parts of the network malfunction.

The decentralized nature of DApps also means that users can have more control over the information they share. With no companies controlling users’ personal data, they don’t need to provide real-world identity to interact with a DApp. Instead, they can use a crypto wallet to connect to DApps and fully control what information they share.

Another benefit of DApps is that developers can easily integrate cryptocurrencies into their basic functionalities by leveraging smart contracts. For example, DApps on Ethereum can adopt ETH as payment without integrating third-party payment providers.

DApps hold the potential to become an important part of a censorship-free future, but every coin has two sides. Decentralized applications are still in the early stages of development, and the industry is yet to resolve limitations such as scalability, code modifications, and a low user base.

DApps require significant computing power to operate, which could overload the networks they run on. For example, to achieve the security, integrity, transparency, and reliability that Ethereum aspires to, it requires every validator to run and store every transaction executed on the network. This could hurt the system’s transaction per second (TPS) rate and lead to network congestion and inflated gas fees.

Making modifications to a DApp is also challenging. To enhance user experience and security, a DApp will likely need ongoing changes to fix bugs, update the user interface, and add new functionalities. However, once a DApp is deployed on the blockchain, it is hard to modify its backend code. It would require a majority consensus from the network’s nodes to approve any changes or improvements, which could take a long time to implement.

The abundance of DApps on the market makes it difficult for one to stand out and attract many users. For a DApp to operate effectively, it needs to achieve a network effect — the more users a DApp has, the more effective it is at providing services. A larger number of users can also make the DApp more secure and protect it from hackers meddling with the open-source code.

DApps offer a fresh approach for businesses across many industries to reach more users. Some popular DApp use cases include GameFi, decentralized finance (DeFi), entertainment, and governance.

GameFi DApps have been growing in popularity, which is exemplified by the rise of Axie Infinity, a play-to-earn game on the Ethereum blockchain. According to DappRadar, blockchain gaming activity in 2022 Q1 saw a 2,000% increase from 2021. It also attracted 1.22 million unique active wallets (UAW) in March 2022, with over 50% of the activity coming from gaming DApps.
Unlike traditional video games, most gaming DApps give players full control over their in-game assets. They also offer players opportunities to monetize these items outside of the game. Axie Infinity, for example, features game characters, virtual land, and gaming items in the form of NFTs. Players can store them in crypto wallets, transfer them to other Ethereum addresses, or trade with other players on NFT marketplaces. Within the ecosystem, players can compete with each other to collect ERC-20 tokens that can be traded on exchanges. Typically, the longer they play, the more in-game rewards they can earn.

Traditional finance relies on financial institutions to act as middlemen. Through DApps, everyone can use financial services without any central authority and maintain full control of their assets. DeFi can also benefit low-income individuals, offering them access to a broad range of financial services at significantly lower costs.

Borrowing and lending are the most popular types of financial services that decentralized applications provide. DeFi DApps offer instant transaction settlement, minimal-to-none credit checks, and the ability to use digital assets as collateral. Users can have more flexibility on DApp lending marketplaces. For example, lenders have more control over their loans by choosing which token to lend and on what platform. Users can also potentially earn 100% of the interest generated from the loan since they don’t have to pay any intermediary fees.

Decentralized exchanges (DEXs) are another crucial example of financial DApps. Such platforms facilitate peer-to-peer trading by eliminating intermediaries such as centralized crypto exchanges. Users do not need to give up custody of their funds. Instead of transferring their assets into an exchange, they trade with another user directly with the help of smart contracts. Orders are executed on-chain and directly between the users’ wallets. Since DEXs require less maintenance, they typically have lower trading fees compared to centralized exchanges. Some popular DEXs include Uniswap, SushiSwap, and PancakeSwap.

Entertainment is an integral part of our lives. With DApps, daily activities that people enjoy are being transformed into digital experiences that can also generate economic incentives. For example, Audius, a blockchain-based decentralized music streaming platform, removes the intermediaries that exist in the traditional music industry to connect artists and fans directly. It allows music curators to better monetize their content and produce immutable records of their work on the blockchain.

DApps are also tackling issues that social media platform users face. Centralized social media giants like Twitter and Facebook are often criticized for censoring posts and mishandling user data. With decentralized social DApps like Steemit, the community can interact freely and express their opinions with fewer restrictions and censorship while enjoying greater control of their personal information.

DApps can empower users to play a greater role in the governance of online organizations by introducing a more community-centric decision-making mechanism. With the help of smart contracts, users that hold governance tokens of a particular blockchain project can create proposals for the community to vote on and cast their votes on others’ proposals anonymously.
One of the decentralized governance models is Decentralized Autonomous Organizations (DAOs). DAOs can be considered fully autonomous DApps that use smart contracts to make decisions without a central authority. They have no hierarchy. Instead, it is economic mechanisms that align the interests of the organization with those of individual DAO members.

How to connect to DApps?

To interact with a DApp, you’ll first need a compatible browser extension wallet like MetaMask, Trust Wallet, or Binance Chain Wallet. They only take a few minutes to set up. Some even offer mobile versions for easy access.
Let’s use Trust Wallet as an example to see how to connect it to PancakeSwap on BNB Smart Chain (BSC). If you don’t have a Trust Wallet yet, check out this Academy article on how to install it on your smartphone.

Tap [Receive] to view your BNB deposit address. You can then copy and paste this address into your withdrawing wallet or scan the QR code to make the transfer.

After the transaction is confirmed on the blockchain, you will see the BNB amount on your Trust Wallet homepage.

Trust Wallet’s default list of tokens does not include DApp tokens like PancakeSwap (CAKE). To make CAKE visible in your wallet, you need to add it to the list first.

Tap [Add Tokens] and search “PancakeSwap”. You will see CAKE on different blockchains. As we’re using BSC, tap to toggle on the button next to [BEP-20 CAKE].

You should now see CAKE on your Trust Wallet token list.

The next step is connecting your Trust Wallet to PancakeSwap. You can connect through the built-in mobile browser on Trust Wallet or a desktop.

Connecting to PancakeSwap via the Trust Wallet browser

1. Tap [Broswer] from the Trust Wallet homepage and go to the PancakeSwap website.

2. You’ll be prompted to connect your Trust Wallet. Tap [Connect].

Connecting to PancakeSwap via a desktop browser

2. Click on the [Trust Wallet] icon and you’ll see a QR code on the screen.

3. Open your Trust Wallet app and go to [Settings] – [WalletConnect].

5. You’ll be prompted on the app to allow the connection. Tap [Connect].

DApps are expanding the functionality of the Web by enhancing conventional applications with blockchain technology. Decentralized applications could bring even more innovative use cases to the market in the future. As DappRadar reported, DApps recorded almost 2.4 million daily active users by Q1 2022, and user interest is expected to grow continuously. However, DApp developers and the blockchain networks they build on are yet to address the current limitations before reaching mass adoption.